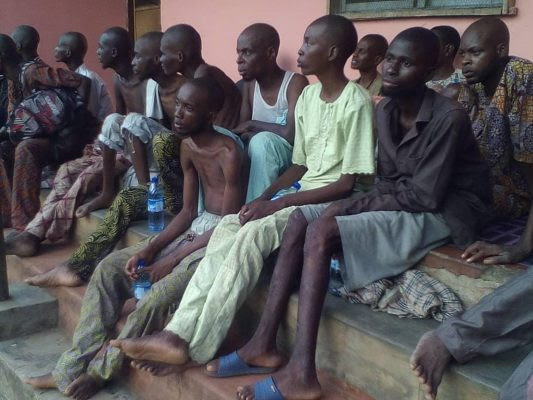 The Oyo State Police Command on Monday November 4, discovered a torture centre in Ibadan where 400 people were reportedly being detained.
The owner of the torture center at Oloore Mosque around Ojoo axis of the state has been arrested alongside his accomplices.
Oyo State Commissioner of Police Shina Olukolu who supervised the release of the victims, said a 17-year-old escapee reportedly told the police about the detention facility.
Olukolu said “the young man said they were being maltreated, they were not being well-fed, they were being treated like slaves and they were engaged in forced labour, and sometime their deaths were not reported to anybody.
“On the basis of that information, the police decided to check it out. We got to Owode, Apata. By the time we got there, they have evacuated that facility. But from the surroundings, we knew that there were people in that place earlier than the time we arrived.
“However, the young man informed the police that there is another detention facility and that is where we are now at Oloore, Ojoo area of Ibadan.
“Actually, when the police got here, we discovered that young men, young women are being kept in captivity in a dungeon-like situation. As a matter of fact, man’s inhumanity to man is being manifested in this environment. And we are not happy about the situation.
“So, we got across to the state government and state government officials are around. They are here with a view of ensuring that some of these young men, who are kept against their will, are liberated and allowed to be in a position where they can take care of themselves.
“Definitely, this area will be secured and the police will be able to do further investigation, further search and anyone at all, who is found culpable, will definitely be arrested, investigated and prosecuted diligently to serve as a warning to others, who may want to operate such houses that serve as illegal detention center.

Post Views: 222 Abuja, Oct. 31, 2016: The Federal Government of Nigeria has congratulated a US- based Nigerian Surgeon, Dr Oluyinka Olutoye on his recent feat in carrying out a successful operation on an unborn […]

Post Views: 195 Two little boys have been arrested for allegedly raping and killing a one year old girl in Cameroon. Police in Kumbe Balindo, Ndian Division in the South West region of the country […]

Post Views: 226 18 people are feared dead after a bomb ripped through a convoy at a car park in Muna garage located in the outskirt of Maiduguri, Borno state this morning. Most of the […]