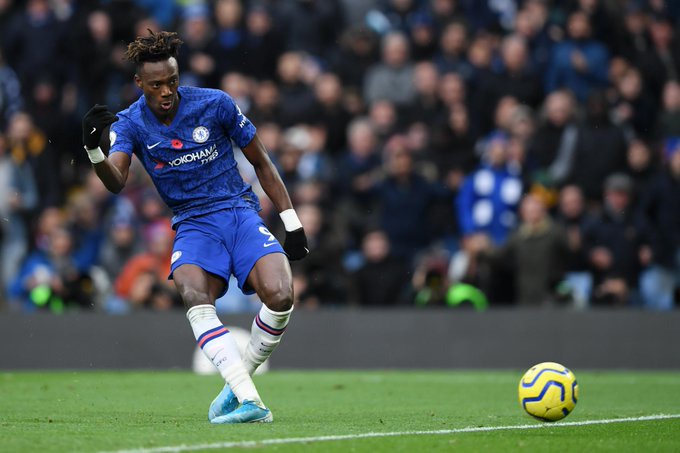 Tammy Abraham has become the second youngest player to reach double figures in the Premier League for Chelsea Football Club behind Arjen Robben.

The English player who snubbed to play for Nigeria made this milestone after scoring for Chelsea in their premier league round 12 fixtures against Crystal Palace in the 52 minutes after receiving an assist from Willian to convert his 10th goal in 12 premier league games this season.

Abraham joined Chelsea at under-8 level and progressed through the club’s academy system. He was part of the Chelsea youth team which recorded consecutive triumphs in both the UEFA Youth League and the FA Youth Cup in 2015 and 2016.In the 2015–16 edition of the UEFA Youth League, Abraham pitched in with a return of eight goals in nine matches, making him the tournament’s second highest goal scorer behind Roberto Núñez. He carried his form into the FA Youth Cup and netted the winning goal in Chelsea’s victory over Manchester City in the final in April. During the 2014–15 and 2015–16 seasons, Abraham scored 74 goals in 98 matches across all competitions for Chelsea’s various youth teams.

His form at youth level caught the attention of interim manager Guus Hiddink who invited him to train with the senior team at the back end of the 2015–16 season. On 11 May 2016, Hiddink handed Abraham his Chelsea debut in a 1–1 Premier League draw with Liverpool, bringing him on to replace Bertrand Traoré in the 74th minute Abraham then made his home debut at Stamford Bridge the following week, once again coming on as a second-half substitute for Traoré in a 1–1 draw with newly-crowned Premier League Champions Leicester City.

Prior to receiving his first competitive cap for the England senior team in October 2019, Abraham was eligible to represent Nigeria through his paternal lineage and was sounded out by the Nigerian Football Association. Abraham’s father is close friends with Nigeria Football Federation President, Amaju Pinnick and on 21 September 2017, Pinnick claimed that Abraham had switched his allegiance to Nigeria. Abraham issued a statement the same day denying the claim and reaffirming his availability for England selection. Upon receiving his first England call-up in November 2017, Abraham stated that there was never any prospect of him choosing to play for Nigeria.

Abraham has represented England at both under-18 and under-19 level. He scored his first goals at age group level for England in March 2015, netting a brace as England U18 defeated Switzerland 6–1. Later that year, while representing the U19 team in a friendly against Japan, Abraham and teammate Patrick Roberts played a game of rock–paper–scissors on the pitch to decide who would take a penalty. Abraham was triumphant but missed the resultant spot-kick. Just a minute later, however, Roberts assisted Abraham for the second goal of the match, which ultimately ended 5–1 in England’s favor.

Abraham was one of three uncapped players called up to the senior England team for friendlies against Germany and Brazil.He made his debut against the former on 10 November, starting in a 0–0 draw at Wembley Stadium.

Abraham made his first competitive appearance for England against the Czech Republic, appearing as a substitute and committing himself to England in the process.

Post Views: 248 Formula one champion Lewis Hamilton has come under fire after the British athlete was photographed snapchatting this morning during a live Japanese Grand Prix press conference. Using the snap chat app on […]

Post Views: 309 EP: Vector – The African Mind Mp3/Zip Download After the successful release of “Cross Roads”, Vector is out with something new and that touches on everything African. On the new extended play […]

[ Hints ] 3 Things To Learn About Curvy Women – Must Read